This Vessel was built in 1938 in England and named “New Royal Lady”. The 45 meters measuring ferry could accommodate 70 passengers and 10 cars. In 1958 the ship came to Malta named “Crested Eagle”. The same year she was renamed to “Imperial Eagle” and brought into service as ferry between Marfa (Malta) and Mgarr (Gozo). Her last duties where to carry livestock and cargo between Valletta and Mgarr.
In November 1995 found the “Imperial Eagle” it’s final resting place as part of a planned marine park just outside Qwara in a depth of 42 meters. 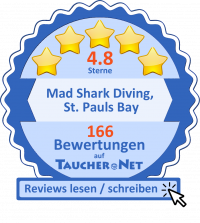